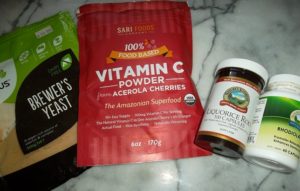 Supplements I take to feel better

I had a subtotal thyroidectomy due to Grave’s disease. The supplements in the picture above help me feel better while on optimal thyroid hormonal replacement. They are suggestions you might consider. However as we are all individuals, speak to your own health care practitioner before taking them, as always. There are many helpful supplements for hypothyroidism.

I find it a very calming remedy. I feel better when I take it, usually a teaspoon per day in the morning. I use it as my source of vitamins B as I do not tolerate synthetic vitamins well. I prefer Brewer’s yeast over nutritional yeast (they are grown and processed slightly differently). I put Brewer’s yeast directly into your food, I like it on scrambled eggs but I also put it into sauces or soups before serving. It is slightly bitter in tasting so I like to mask the taste a little.

Brewer’s and nutritional yeast is are made from yeast called Saccharomyces cerevisiae (used in baking, beer making process) which is grown and then deactivated (it is no longer alive) for nutritional supplement. It is a very rich source of natural vitamins B, chromium, potassium and selenium. It can help to improve insulin sensitivity (as it contains B1 and chromium), it helps the immune system function properly (rich in selenium) and also supports the adrenal glands (so important for thyroid patients) with vitamins B. Brewer’s yeast and nutritional yeast generally to not contain vitamin B12 unless it is fortified with it so if you are deficient in B12 you need to supplement with it separately. Also some products are not gluten free is you are sensitive to gluten.

Aussie favorite Vegemite is also a yeast spread (not gluten free), rich in vitamins B.

Brewer’s yeast can interact with some medications such as monoamine oxidase inhibitors (for treatment of depression), meperidine (pain medication) and diabetic medication. It is also on advisable in certain conditions. Some people may be allergic or sensitive to Brewer’s /nutritional yeast.

My favorite supplement is natural Vitamin C powder from organic acerola cherries. Firstly because it is a complete vitamin C not just ascorbic acid. It is a powerful antioxidant, detoxifying vitamin and support for adrenal glands. I dissolve a teaspoon in some water and drink it few times a week. I had noticed it gave me an energy boost so I take it before midday. I see benefits of vitamin C powder for my general well being but as with any supplements, it is advisable to ask your doctor before taking it.

It is a great herb to take for adrenal support. It is helpful for the first stage of adrenal exhaustions but not for later stages when cortisol is low. Basically, it is useful during stressful times. It is an adaptogen, a buffer for all endocrine organs involved in stress reactions. However, when a person feels chronically stressed for a long time, exhausted most of the time and has difficulties getting out of bed, it usually indicates later stages of adrenal exhaustion and low cortisol. Rhodiola may not be as effective as it reduces the secretion of cortisol in stressful situations thus balancing the output of adrenals.

Rhiodiola can be useful in Grave’s disease sometimes cases but it is specifically used and recommended in hypothyroidism. Rhodiola influences beta-endorphin and can lift mood. It can also enhance thyroid function, thymus gland function and improve adrenal gland reserves.

I take it for few weeks when I feel stressed but not exhausted. It is considered safe in recommended doses and is wildly used in Russia and Scandinavian countries. It is not recommended in people with bipolar disorder and for pregnant/breastfeeding women.

Licorice has been approved by The German Commission E for ulcer treatments. It also has other important effects. Licorice is useful for exhausted adrenal glands, which is very common with hypothyroidism. Licorice root contains plant components mimicking the effects of cortisol. Therefore it might be useful when you feel ran down, tired and stressed and when cortisol is low (in the later stages of adrenal exhaustion).

I take licorice supplement when I feel ran down, stressed and tired. I usually take it for about 3 weeks at a recommended dose and then take a break.

Licorice is considered safe in low doses. People with cardiovascular, renal and liver problems should take caution. Licorice may interact with warfarin, corticosteroids and oestrogen therapies. Not to be taken with bipolar disorders, in those taking hypertensive and hypoglycemic medications. It can raise blood pressure after prolonged use. Pregnant and breastfeeding women are not advised to use it as the safety in pregnancy has not been established. Apart from these cases, it is recommended in literature to take it sporadically at recommended doses and to have a break after 4-6 weeks of use.