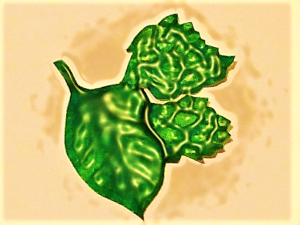 Hops is dried female flowers or seed cones of the hop vine (Humulus lupulus). It may help with hypothyroidism and many other health conditions.

Hops is traditionally used in beer making process and gives beer its unique aroma and slightly bitter flavor. It is used as flavoring component in some soft drinks.

It has been approved by the German Commission E for anxiety/mood disorders and restlessness.

Some scientific research (1) has shown that it helps thyroid hormones work better in the body. Xanthohumol, a flavonoid molecule in Hops, was found to modulate expression of genes involved in thyroid hormone distribution and metabolism in the liver. Xanthohumol affects expression of molecules which carry thyroid hormone in the body and regulates enzymes metabolizing hormones. It helps with the activity of iodothyronine deiodinase which converts thyroid T4 hormone into the active T3 hormone and it does so by decreasing inflammation, specifically NF-kappaB activation which is a key molecule to starting inflammation in the body (5, 12, 13). It  lowers pro-inflammatory cytokines such as TNF-alpha and IL-6; less inflammation = better thyroid hormone action.

There are no studies as such on thyroid autoimmune disease and Hops but it might be very helpful for Hashimoto’s thyroiditis as it helps iodine to be up-taken by thyroid cells (2). It lowers inflammation as mentioned above, helps with sleep, anxiety, fibromyalgia and processing of hormones.

Hops has been used to help with rheumatic diseases and is present in some thyroid supporting supplements. It has anti-oxidant and anti-microbial activities. Preliminary studies (8) indicate that it may also improve cholesterol profile and lower markers of inflammation (such as C-reactive protein and complement C3 fraction) which is great news for the cardiovascular system and autoimmunity.

Hops helps to balance female hormones. It contains phytoestrogenic compounds (such as 8-prenylnaringenin, one of the most potent herbal phytoestrogens) which are similar to the hormone oestrogen. Oestrogens produced in the female body need to be balanced with another hormone called progesterone. However the production of progesterone is the first to go rapidly down during perimenopause and premenopause, often creating a state of ‘oestrogen dominance’. I refer you to a book by Dr John R. Lee “What your doctor may not tell you about premenopause.”

This is how Hops can possibly help. I have my own theory and interpretation on how Hops may balance oestrogens in the body. The phytoestrogenic compounds in Hops can mildly replace excessive and strong oestrogens in binding sites of tissues and because phytoestrogenic compounds only have a mild oestrogenic activity, the oestrogen –progesterone imbalance is not felt as severely during the premenopausal transition. Also Hops helps to metabolize oestrogens in the liver. A study (15) has shown that Hops (Humulus lupulus) inhibits oxidative estrogen metabolism and estrogen-Induced malignant transformation in human mammary epithelial cells (MCF-10A), which means it may be protective against breast cancer.

Also, during menopause oestrogen production eventually goes down, Hops can provide some estrogenic activity, it may help with hot flushes and sweating. Hops may help to prevent osteoporosis. It is believed to have anti-cancer activity. However women who have hormone sensitive cancer or conditions should speak to their doctor regarding Hops as it is not known how Hops can impact these conditions.

My friend’s mum got advice from her doctor to have some Hops beer when she was going through a difficult menopause which had helped her. It makes me smile as I have a picture in my mind of menopausal women turning to beer for help during this bumpy time in their lives as everything else fails to help them feel better but I personally would recommend Hops tea or non-alcoholic Hops beer…

Hops is relaxing to the central nervous system. This effect has been documented in human studies. I have seen this first hand. I started to drink Hop’s tea few hours before sleep in recent weeks and I am surprised on how effectively it improved my sleep and my general well being. It is very relaxing for me. It is not surprising as Hops was shown to raise GABA, an inhibitory neurotransmitter acting in the central nervous system (CNS).

Hops is considered very safe to use but please as always consult your doctor before using hops, care needs to be taken in some medical conditions. This blog is for educational purposes only.

2 thoughts on “Hops for good health”