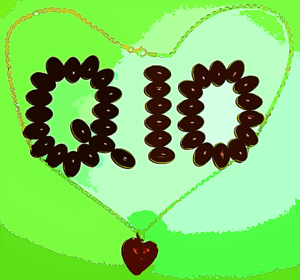 Coenzyme Q10 (CoQ10) is a fat soluble molecule which is made by our body (primary in the liver) and is essential for energy production. I had talked previously about another important molecule, L-carnitine which is also needed to make energy in cells. Coenzyme Q10 is just as important. It is especially concentrated in the heart and brain. CoQ10 has two forms: oxidized Coenzyme Q10 (ubiquinone) and reduced form (ubiquinol). Ubiquinone is converted into ubiquinol in the body so that it can utilised. Ubiquinol is a powerful antioxidant. It protects cell membranes, proteins, DNA and mitochondria from free radicals. CoQ10 works well with vitamin E and C.

Thyroid hormone ignite the energy production process in mitochondria in every cell of our body. Coenzyme Q10 is needed in the chain of that process in order to generate ATP, energy and life giving molecule. Thyroid cells, just like every single cell in the body, need Coenzyme Q10 to function.

In Graves’ disease, the body uses up more CoQ10 due to the accelerated energy production. It is a common deficiency coexisting with hyperthyroidism. A scientific study (3) has shown that the values of CoQ10 in hyperthyroid patients are among the lowest reported in different human diseases. The heart works forcefully and beats faster in Graves’ disease putting a strain on the heart muscle and increasing the demand for Coenzyme Q10. Basically, in Graves’ disease, the body uses more CoQ10 than it can produce. A scientific studies (2, 3 and 5) had demonstrated that people with hyperthyroidism have significantly lowered Coenzyme Q10 levels when compared to patients with normal thyroid function. In the study (5) on cardiac performance and Coenzyme Q10 in thyroid disorders, it was shown that heart performance was improved in patients when 120mg of Coenzyme Q10 was given daily for one week to 12 hyperthyroid patients. ”It appears, therefore, that the Coenzyme Q10 dose actually has a therapeutic value for congestive heart failure induced by severe thyrotoxicosis.”

On top of that, excessive thyroid hormones may deplete other necessary mitochondrial nutrients faster such as vitamins B, L-carnitine, potassium, selenium and magnesium. The imbalance of thyroid hormones, essential nutrients and antioxidants, such as CoQ10 may lead to mitochondrial dysfunction which can be connected to autoimmunity. Study (4) had shown that Coenzyme Q10 deficiency is associated with selenium deficiency.

Deficiency of CoQ10 may lead to muscle and joint pain as well as muscle damage and mental and physical fatigue. Mood swings, inability to handle stress and memory lapses can be a sign of a low CoQ10.

Coenzyme Q10 levels decline with age and lowered levels are connected with certain other health conditions (such as diabetes, heart disease, depression, migraines). Other condition in which Co Q10 can be reduced are: underactivity of the adrenal glands (hypoadrenalism) and underactivity of the testes and ovaries (hypogonadism). Smoking and obesity also depletes Q10. Cholesterol lowering medications (statins) may result in decreased levels of CoQ10 and other oil-soluble nutrients in the body (6). These medications interfere with an enzyme which produces both cholesterol and Coenzyme Q10. You might consider supplementing with Q10 if you are taking cholesterol lowering medications.

Many medications used to treat blood pressure, such as propranolol were shown to lower CoQ10 levels (1). Also, people with essential hypertension (even those not treated with hypertensive medications) were shown to be deficient in CoQ10 (1). This study by Kishi H, Kishi T and Folkers K concludes that:” A pre-existing deficiency of coenzyme Q10 in the myocardium of hypertensive patients could be augmented by subsequent treatment with propranolol, possibly to the “life-threatening” state described by others.” This means that if you have Graves’ disease and take propranolol to lower your blood pressure, your CoQ10 levels need to adequate. Blood pressure medications such as propranolol are commonly prescribed for patients diagnosed with Graves’ disease.

Let’s look at the opposite condition of thyroid dysfunction- hypothyroidism. Low levels of energy may be due to low thyroid hormone levels and/or low levels of certain minerals, vitamins and other nutrients. Studies show that CoQ10 levels seem to have an inverse relationship with free T3 hormone which means people with hypothyroidism are less likely to have low coenzyme Q10 levels than people with hyperthyroidism. Scientific studies showed that the CoQ10 levels did not show any significant difference in hypothyroid people vs normal healthy patients (2).

People suffering from Fibromyalgia have high levels of inflammation (sore and painful muscles as often seen in hypothyroidism) may possibly have lowered Coenzyme Q10 levels. Blood test would be useful to determine individual CoQ10 levels, especially for someone with an autoimmune disorder. If you are diagnosed with CoQ10 deficiency and are taking thyroid hormones such as Synthroid, CoQ10 should be taking 2hour apart from the thyroid hormone.

Coenzyme Q10 is made in the body from tyrosine amino acids which our body can manufacture. Tyrosine is also a building block of thyroid hormones. It also requires C vitamin, some B vitamins and trace minerals to be made in the body. According to Dr Sarah Myhill (11) the synthesis of this molecule can be inhibited by chronic illness and toxins. CoQ10 can also be supplied in food. It is present among others in beef, organs such as heart and liver, fish (herring and rainbow trout), olive, canola and grape seed oils, parsley, avocado, broccoli, cauliflower, orange, strawberries, roasted peanuts, sesame seeds, pistachio nuts and eggs.

Supplements may help with allergies, migraines, strengthening of the heart muscle and with TED. CoQ10 supplements are widely available without a prescription. They are considered safe at the recommended doses and without major adverse effects. Usual dose is 30mg/day. There are two types of CoQ10 used in supplements: ubiquinone and ubiquinol. The most common is ubiquinone, in powder form or dispersed in oil. Oil form increases its bioavailability. The natural source of ubiquinone (made from fermentation process) might be a preferred choice. Ubiquinol form of Coenzyme Q10 is believed to be better for older people as it is better absorbed and the ability to convert ubiquinone to ubiquinol decreases with age. It was shown in a study to raise CoQ10 levels faster (9). Co-supplementation with vitamin E might be beneficial. People who are deficient in CoQ10 might need to check their selenium levels as these two deficiencies commonly co-exist. Adequate magnesium levels are also important for heart health.

Coenzyme Q10 is a blood thinner so care needs to be taken in individuals with certain medical conditions (such as diabetes as it lowers blood sugar)and those taking warfarin, aspirin or other blood thinners. It is best to stop taking Coenzyme Q10 before surgery. It should be avoided if pregnant or breastfeeding (as controlled studies are not available). Therefore, it is advisable to consult your doctor before supplementing with Coenzyme Q10.

This blog is for educational purposes only.