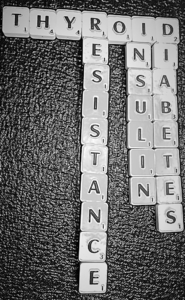 Thyroid hormones imbalances, both hyper and hypothyroidism can cause poor blood sugar control, increase the risk of insulin resistance and the risk of developing type 2 diabetes due to effects of thyroid hormones on the production, demand and performance of insulin in the body and common genetic factors. There is plenty of scientific evidence supporting the contribution of thyroid hormonal imbalances to Type 2 Diabetes Mellitus. All hormonal system are intertwined. Autoimmune thyroid conditions also increase the risk of Type 1 Diabetes Mellitus ( autoimmune illness) and vice versa.

Blood sugar needs to be kept at between 3.9 and 5.5 mmol/L (70 to 100 mg/dL). It is regulated by few factors: glucose storage and release from glycogen by the liver, intestinal absorption, glucose uptake in muscles and fat cells and the production of insulin by pancreas. Insulin is a hormone made in pancreas which takes the sugar out of blood when it gets too high.

Thyroid hormone is the hormone that starts the energy production inside of the cells and insulin helps to supply the cells with fuel-glucose. The hormonal systems work together so it is clear that imbalance of one will imbalance the other.

The increase in thyroid hormones signals the body to rapidly increase energy production and stimulates liver through the sympathetic nervous system. That is the main reason for glucose intolerance. The needs for glucose increase to keep up with an increased metabolic rate. Growth hormone somatotropin is released accelerating the production of liver glycogen to glucose. There is also a rapid glucose absorption from the intestine. In Graves’ disease, more proinsulin is secreted from the pancreas. It is however not properly converted to insulin. Insulin is also more rapidly degraded in kidneys. Hyperthyroidism is associated with insulin resistance of liver cells. The liver cells overproduce glucose and are ‘deaf’ to insulin signals. However, the skeletal muscle cells have an increased glucose absorption. The production of energy from glucose is changed towards glycolysis and lactate formation in muscles. It has been shown in Japanese studies that people with Graves’ disease are twice as much of a risk of developing non insulin-dependent diabetes (type II) diabetes when compared to a healthy population (1).

A medication, called thiazolidinedine, used sometimes to increase insulin sensitivity should not be given to people with type 2 diabetes, thyroid autoimmunity and ophthalmopathy as it may worsen the eye condition (7). Also when people with thyrotoxicosis (excessive thyroid hormones) and diabetes are given too much insulin, they at risk of diabetic ketoacidosis, which increases the risk of a cardiac arrest, therefore these two conditions of hyperthyroidism and diabetes need to be controlled properly.

T3 is an extremely potent elixir of life. Hypothyroidism and insulin resistance go together. Lack of T3 (even sub-clinical) may lead to blood sugar problems, insulin resistance and type 2 diabetes. The risk of developing type 2 diabetic is higher in hypothyroidism than hyperthyroidism. Low T3 causes liver and pancreatic function to be poor, lowers the secretion of insulin and stresses those organs. Low T3 also causes impaired glucose metabolism in peripheral tissues. The peripheral muscles become less responsive to insulin. The transport of glucose inside of cells is impaired due to lowered expression of transport genes due to hypothyroidism. Also there is reduced disposal of glucose. Under methylation issues has been postulated as a possible mechanisms, which increase insulin resistance. Another one is the dysregulation of metabolism of leptin, hormone which regulates hunger. Hypothyroid people store less glucose in the liver as glycogen and are more prone to low blood sugar. As a consequence, both adrenaline and cortisol start rising at night.  Adrenaline can peak around 2am and a person can wake up with heart palpitations. Cortisol hormone may be high in early morning, raising fasting blood sugar. I certainly had that happen to me when I was hypothyroid as mentioned in my previous post. I used to get up and have a snack in the middle of the night, which always stopped the heart palpitations.

Thyroid is a major player in the part of brain called hippocampus which is very vulnerable brain region in general as it modulates glucose metabolism and insulin signalling. Damage to hippocampus has been connected to hypothyroidism, memory problems, special navigation problems, dementia and Alzheimer’s disease. It may also be connected to the development of type 2 diabetes.

In my personal case, I had blood sugar issues when I was on levothyroxine only hormonal replacement and also when I suffered from thyrotoxicosis. My glucose tolerance test was impaired.

Ways which may improve insulin sensitivity and lower blood sugar:

Vitamin B1 especially (Benfotiamine, fat soluble form of B1 might be beneficial)

Chromium mineral, vanadium, and B vitamins (Brewer’s yeast can provide these)

Herbs which may help:

This post is for educational purposes only. Any supplements to lower blood sugar should be taken under doctor’s supervision.