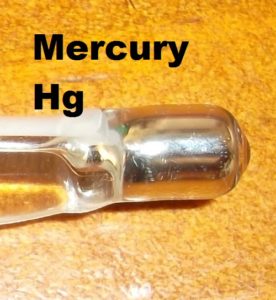 Mercury stops thyroid hormone T4 conversion into its active form T3. Mercury also reduces thyroid hormone production in the thyroid gland by interfering with iodine binding. It also inhibits thyroid hormone action. Mercury is toxic to all body systems including the immune system. It tends to accumulate in endocrine glands such thyroid. It disrupts the energy houses of cells and affects the balance of minerals in the body, especially zinc, copper, magnesium, calcium and lithium. The reason is the binding of mercury to sulphur groups on Metalloprotein (MT) which is involved in metals transport and detoxification.  Zinc mineral in some ways counteracts the effect of mercury while copper tends to accumulate in the body with mercury. Lithium might be low with mercury toxicity. Mercury can cause the major body detoxifying molecule- glutathione to be depleted by binding to and inactivating sulphur components of the system.

Mercury can be found in amalgam, dental fillings. Most can contain as much as 50% mercury which is mixed with other metals. They are those dark, silvery grey dental fillings. Even though amalgam dental fillings are considered relatively safe, there is a controversy regarding their safety. Mercury particles may be released from amalgam fillings and provide a small dose of this toxic metal daily. Having MRI scans may release more mercury from dental fillings (5). The higher number of amalgam dental fillings, there greater possibility of getting more mercury into the system. Some people have an immune system which is very sensitive to mercury. Perhaps those who are stressed, have low selenium level or low iodine levels, lowered zinc levels, heavier toxic load and disturbance of healthy gut bacteria (which help to remove heavy metals) might be more sensitive to lower levels of mercury.

In recent years the mercury containing amalgams are not as frequently used, being replaced by white resin composite fillings. One of the ways mercury can get into our body is through ingestion of contaminated fish and shellfish especially large fish such as Bluefin tuna, swordfish, mackerel, marlin or shark. Fish tend to accumulate mercury and cannot dispose of it properly. Environmental mercury pollutes our oceans. Mercury can get to the environment from many industrial processes as well as volcanic eruptions. It is also present in clay minerals. There are still some products containing mercury such as mercury containing lamps, thermostats or fluorescent tubes and bulbs.

Thimerosal is a mercury containing antifungal and antibacterial compound used to preserve some medical preparations. Some people are allergic to thimerosal. Thimerosal has been taken out of childhood vaccinations but there are still multi -dose influenza vaccine preparations containing thimerosal. The presence of mercury in vaccines is controversial.

Some red tattoo inks also contain mercury and cadmium, another toxic metal. Mercury has been banned from cosmetics. However, some unregulated make up products, skin lightening creams may possibly contain mercury so make sure you buy products from reputable companies. Look for ingredients containing mercury or calomel (mercury chloride mineral).

One of important minerals which helps to remove mercury from your body is selenium which is a part of the glutathione system. People with thyroid autoimmunity may be deficient in selenium. It might be also more important mineral for people with mercury containing fillings in their teeth to have optimal selenium levels.

Mercury is very difficult to remove from the body naturally and takes a long time. Green leafy vegetables, sulphur rich foods (garlic, onions), vitamin C, coriander, cruciferous vegetables (such as wasabi) and fermented foods support the body in removal of toxic metals. Having adequate levels of selenium and vitamin E are important. Brazil nuts are quite rich in selenium and you can consume 2 daily to get enough selenium (if you are not allergic or sensitive to nuts). Glutathione helps to remove heavy metals and glutathione enhancing nutrition/supplements were discussed previously. Brewer’s or nutritional yeast has glutathione building nutrients.

Stress reduction and adequate rest are also important. There are quite a few liver detoxification products on the market. Milk thistle has long been used in liver disease and helps boost glutathione levels. Milk Thistle and coriander (Cilantro) have mercury and other detoxifying properties. However ragweed (common in Graves’ disease) allergy has been connected to milk thistle allergy. Therefore it might not be suitable for all. Lipoic acid may also help to remove mercury.

Infrared sauna may help with Hg removal through sweat.

Medical treatments for mercury toxicity involve the use of metal chelating drugs such as DMSA (used in children), DMPS, DPCN, or BAL compounds.

You might consider removal of mercury amalgam teeth fillings. However, it might be more dangerous than having undisturbed fillings. It needs to be done by highly competent and experienced dentist (such as Biological dentist) as vapors created during removal might make things worse. Avoid eating large fish and choose smaller varieties. Eating smaller varieties of fish two times a week should not be a problem.

Speak to your doctor if you have concerns regarding mercury.