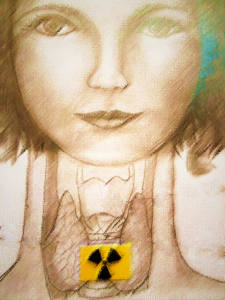 Radioactive Iodine treatment for Graves’ disease – what you should know.

In his book, ‘Graves’ disease and hyperthyroidism; what you must know before they zap your thyroid with Radioactive Iodine’, Dr. Sarfraz Zaidi (1), stated that many of his patients said they have had never felt the same after RAI.

Dr. Osansky in his book: ‘Natural treatment solutions for Hyperthyroidism and Graves’ disease’ stated that he believes that RAI should be the last resort in the treatment of GD (2).

RAI is the most commonly used treatment for Graves’ disease in USA. It is the cheapest treatment.

It is a radioactive isotope of iodine introduced in 1940s to treat thyroid problems. It is produced for medical use through nuclear fission in nuclear reactors from neutron-irradiation of a natural tellurium. I-131 is also a by-product of a nuclear fission processes in nuclear reactors and is a significant contributor of radiation after open-atomic bomb testing, Chernobyl disaster and Japanese nuclear crisis. It is a major component of a nuclear fallout. In the case of a nuclear fallout, the dose of radioactivity persists for long periods in a human body due to a sustained and high exposure. RAI treatment for Graves’ disease is short exposure.

The RAI is administered in a separate room in a hospital (nuclear medicine wing). The patient is given a pill or fluid with sodium iodide, which contains radioactive iodine I-131 (the pill will be in a lead encased vial). It has no taste or smell. The patient will be asked to take the pill and swallow it with water or might be asked to drink a fluid containing radioactive iodine from a lead lined jar and needs to stay in the room for around 30 minutes.

The patient will be instructed by the medical staff about the necessary precautions to take in order to avoid contaminating other people with radioactivity. Those precautions must be complied with and are set by Nuclear Regulatory Commission.

What happens inside of the body?

A small amount of radioactive iodine is also taken up by the salivary glands, stomach, small intestine and the breast tissue. The purpose of up taking iodine into these tissues is not known but it is suggested it has to do with iodine antioxidant properties. In the breast tissue, iodine is involved in the regulation of oestrogen receptors.

It is important to note that since the radioactive iodine is taken into other tissues as well, some damage can occur there as well.  The radioactive iodine will be secreted through sweat, saliva, urine and other bodily fluids (majority is excreted in about 5 days). The rest of I-131 will be eliminated from the body over the next several weeks in smaller amounts, as the body processes thyroid hormones created with the I-131. It is important to note that these radioactive hormones might be circulating in the blood to all body tissues.

Radioactive iodine is usually used in people over 20 years of age due to possible radiation side effects in children. The general feeling in the scientific community is that RAI should be avoided in children, especially these younger than 5 years of age as it had been noted that small children are more vulnerable to thyroid cancer (as was observed in Chernobyl nuclear disaster and some RAI follow up studies). Thyroid cancer risk may be increased (3, 7). These risks were shown to be increased if RAI was given to people in the first two decades of their life (4).

There are some conflicting studies regarding an increased risk of future cancer after RAI. There might be a minimal increase in developing some forms of cancer in later years (exact risks not established), mainly parathyroid, stomach, bladder, kidney, salivary glands, thyroid and breast. 2007 Finland study showed that the risk of stomach, kidney and breast is increased in people who had RAI (5).  A Swedish study (6), which included 10,000 people, showed that the risks were significantly increased for brain, kidney and stomach cancer (risk for stomach cancer increased with a higher dose and longer post treatment time). The study showed “support to the view that a radiation dose delivered gradually over time is less carcinogenic than the same total dose received over a short time.” Another Swedish study (7) showed increased rates for endocrine tumours other than thyroid, lymphomas, leukaemia and nervous system tumours. English and American combined large studies showed small increases in the lung, breast, kidney, and thyroid cancer (3) but the total mortality rate from cancers in RAI treated people was only insignificantly higher and close to the expected norm.

Mortality rates from different causes may be increased with cumulative doses of radioiodine, especially from vascular causes (including heart arrhythmias, cardiovascular and cerebrovascular deaths) and bone fractures after RAI treatment. There are only a few studies done to research the effect of RAI on mortality rates.  English study (8) of treated hyperthyroid patients showed marked increases in overall deaths from a year to later life after RAI treatment. This was also found in the Finnish study (9). The results were conflicting with an American study, which did not show increased rates of mortality (10). There have been some stipulation in the medical environment that these increased mortality rates may be due to the original hyperthyroidism, leaving its mark on vascular and overall health. It was concluded that hyperthyroidism was not a reversible disorder without a long-term consequences (14, 15).

Vitamin E, turmeric and Holy basil showed some protection against Iodine 131 damage in salivary glands and the bone marrow in studies in rats (11). Ginkgo biloba may decrease damage to body cells caused by radioiodine therapy in patients with Graves’ disease. A scientific study (12) involving 761 RAI treated patients for GD, showed that ginkgo biloba extract did not change the clinical outcome of RAI therapy. It however could possibly prevent genetic damage effects of radioiodine therapy. Consult your doctor regarding using ginkgo or holy basil.

Personally, I was given a choice of RAI but opted for surgery when I had Graves’ disease. I was planning a family at the time and wanted to get off anti-thyroid medications so I thought that surgery would be the best choice for my unborn children. I was scared of effects of RAI on my body. At the time, I had no idea about holistic approaches to Graves’ disease. To nuke my thyroid or not, that was the question easily answered in my mind as I always associated radioactivity with nuclear testing.

I would be interested in hearing personal stories of people who had RAI. The stories I had read so far, was that some people were happy with their RAI treatment but others regretted having RAI for Graves’ disease.

The blog is for educational purposes only.

4 thoughts on “Radioactive Iodine treatment for Graves’ disease – what you should know.”